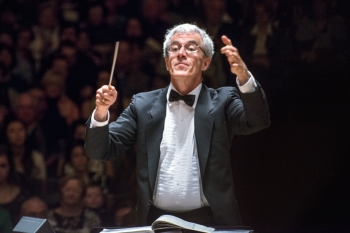 John Finney is now in his 27th year as Director of the University Chorale of Boston College, and has been the conductor of the Boston College Symphony Orchestra since 1999.  Under his direction, the University Chorale has performed throughout the Boston area, and in a number of the world’s major cities, including New York City, Dublin, Barcelona, Madrid, Berlin, Prague, Vienna, and Rome.

In March 2013 he was proud to conduct both the University Chorale and the Boston College Symphony Orchestra in Boston’s Symphony Hall, as part of the celebratory concert in observance of the 150th anniversary of Boston College. In November 2013 he conducted the Chorale in the world premiere performances of God’s Grandeur, composed by Boston College Professor Thomas Oboe Lee, in honor of the sesquicentennial year of Boston College.

John Finney has been recognized as one of the most important musicians in the Boston area. He has served as Director of Music at the Wellesley Hills Congregational Church in Wellesley Hills for more than 30 years, and he has also been the conductor of the 90-voice Heritage Chorale in Framingham for more than 25 years.  He has performed as harpsichordist, organist, and conductor at the acclaimed Blue Hill Bach Festival in Blue Hill, Maine since 2013.  He was Associate Conductor and Chorusmaster of the world-renowned Handel & Haydn Society in Boston from 1990 until 2014.

Holding degrees in organ performance from the Oberlin College Conservatory of Music and The Boston Conservatory, he has concertized extensively throughout the United States and Europe as organist and harpsichordist.  He has been a member of the organ faculty of The Boston Conservatory, and taught for six years at the Academy for Early Music in Bressanone, Italy.  In August 1999, when he was appointed the conductor of the Boston College Symphony Orchestra, John Finney was given the title of Distinguished Artist-in-Residence at Boston College.